Last year on the 4th of July, Lindsay and Andrew went on separate holiday excursions.  Andrew and his buddies went over to Maine to go to the hip Nativa concert, while Lindsay and Amanda went on an epic kayak trip down the Androscoggin River.  Andrew’s adventures at Nativa should probably qualify as an outdoor adventure (the concert was outside and including tenting), but we’ll stick to the girls weekend which has more exhilarating excitement!

Lindsay and Amanda, friends from college and park ranger buddies, headed out on a Sunday morning.  The plan was to kayak from Errol, NH down to Mollidgewock State Park and camp for the night.  The next day we’d kayak down to Pontook Reservoir.  It took the better part of the day to stash cars and set up camp, but luckily we’d been able to get boat ride from the nice Rangers at Umbagog State Park to the mouth of the Androscoggin River.  They give rides out to the remote sites which is a really cool if you want to paddle the remote sections of the lake.  The campsites are really nice and when the motor boat traffic dies down in late afternoon, Umbagog can be as smooth as glass.  Umbagog Lake is a man made lake that straddles the NH/ME state line and is mostly surrounded by a US Fish and Wildlife Service Wildlife Refuge.  It is a guarantee that you will see loons, bald eagles, and osprey on any trip to Umbagog.  It really is a magical place. 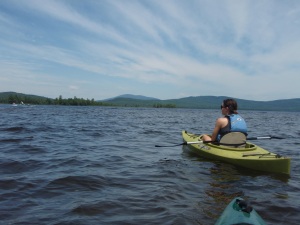 We paddled down the Androscoggin River watching loons and trying not to interrupt too many fishing lines that boaters were dragging behind them.  We eventually came to our portage at the Errol Dam.  We pulled our boats out and managed to carry both at the same time on the short portage around the dam.  After this we hit our first rapids.  Even though we were in kayaks and had our gear in water bags, we did not have skirts so we were wet after the first rapids.  Lindsay had never been kayaking on a river, but Amanda had some experience and talked Lindsay through her first class II.  It was fun and we learned to perfect how to approach and when to avoid certain rapids.  Very quickly we came to the class III rapids that flow under the Errol Bridge.  Being the braver of the two, Amanda zipped down them like a pro, but Lindsay bailed and portaged across the road to the other side of the bridge.  Even with the portage, the rapids were still pretty amazing just below the bridge.  What an adrenaline rush!

The next section of the river was calm and beautiful.  We snacked, opened beers, and enjoyed the views.  Our campsite at Mollidgewock had its own river access and we managed to spot our tent to know which site was ours.  We had made good timing and took our time cooking dinner over the campfire.  It felt really fun to be camping at a campground where everyone else had driven in and we had kayaked to our site!  A friendly camping neighbor entertained us until late in the evening before we slept soundly until morning. 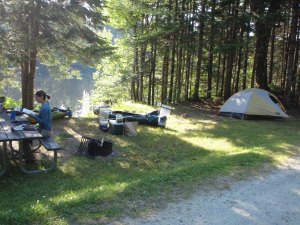 The next morning, Lindsay and Amanda packed up and checked in with the Park Rangers to let them know our plans to come back for our tent and cooler later that afternoon.  It was a Monday just after the holiday, but they were not expecting to fill up so they didn’t have any problem with us just leaving our stuff there for the day.  We jumped in our boats, excited for a nice long day on the river.  We had many miles until Pontook Reservoir, but we had all day to do it.  Even though Amanda was planning to drive back to VT that evening, neither one of us was going to work the next day.

The river just below the campground had some rapids and we zipped along the first 4 miles or so in no time at all.  We were getting really good and Lindsay was getting braver.  We tried to take pictures of the rapids, but it was difficult to paddle and try to get a good shot.  On the slow sections of the river we found snakes, dragonflies, and butterflies.  We knew the cars driving home from their 4th of July holiday must have been envious of us still on the water.  Almost every car heading south on Route 16 had a boat on top, probably heading back down to southern NH or MA.  It was a beautiful day and we were sun goddesses!

One of two snakes we found swimming the river. One darted deeper into the river (probably a water snake), but this garter snake was easy to coax on a paddle for multiple pictures.

A few sections of the river drifted away from the road and we found more class I and II rapids.  Feeling more confident, Lindsay followed Amanda down the middle of some big rapids, when all of sudden she got stuck up on a rock.  The water rushed all around the boat, adrenaline rushed through her veins, as she tried to scoot her boat off the rock without it tipping over.  Amanda looked back to see Lindsay teetering in the middle of the rapids, a look of excitement and fear on her face.  One final, big scoot and Lindsay slide back into the water without falling out.  Wow!

A few brooks fed into the Androscoggin and we explored, hoping to spot a moose.  (Lindsay and Andrew explored one a year later: Paddling Unknown Brook).  We finally made it to Pontook Reservoir after two days of an epic kayak trip down the Androscoggin River.  We retrieved the truck up at Umbagog State Park, stopped at L. L. Cote’s for an ice cream and said goodbye.  Lindsay picked up her kayak on the way past Pontook Reservoir and hurried home to tell Andrew all about her trip.  But, Andrew had been home hours before and was still out on a hike into Icy Gulch to beat the heat (where you can find ice year round).  It was a great 4th of July adventure full of excitement, friendship, and sun.

One thought on “Kayaking the Mighty Andro”