After two days at Neshowdenuhunk Field Campground in Baxter State Park (read our blog: Doubletop), we headed north toward South Branch Pond Campground.  Before we settled into our new home for two nights we stopped in the working forest part of Baxter State Park, the only section of the park that has active logging.  Andrew had read about some old-growth forest that we wanted to see if we could find it.  We hiked up the Frost Pond Trail through a recent selective harvest and up the low shoulder of Wadleigh Mt.  At the first viewpoint we could see we were on the edge of the dramatic rise of mountains to the south that is the core of the park, but the view was limited on such a cloudy and misty day.  We did find amazing fall foliage colors and listened to the yipping of some coyotes well below us near where the truck was parked.

A cloudy and misty hike to first view.

On the way back down the trail, we followed what we thought was an abandoned section of the trail in search of the old-growth.  This trail still had visible trail markers and it looked to be regularly used (we assumed for ecology research).  As we continued on, we started to notice some fairly large big-toothed aspen trees.  None of the other trees seemed quite as old, but the big-toothed aspen stood out as being the largest we’d ever seen.  How interesting, we thought, an old-growth forest dominated by big-toothed aspen!  The trail we were following never seemed to end, so we turned around after nearly a mile.  We had no idea where this was taking us and we were anxious to see our campsite, so we headed back down the trail.

Andrew at one with his hiking

Our lean-to site was amazing, with a beautiful view of South Branch Pond and our own private pebble beach.  We can certainly see why this campground is very popular.  In addition to lean-to sites there are tent sites, a large rent-able cabin, and canoes that you can rent for only $1 an hour! When we arrived it was still overcast with the wind howling, so we stayed bundled up in our warmest clothes, played scrabble, and chatted with Ranger Gabe.  In the evening we quietly walked around searching for moose, but we found none.

The view of the pond from inside our lean-to site was just wonderful! 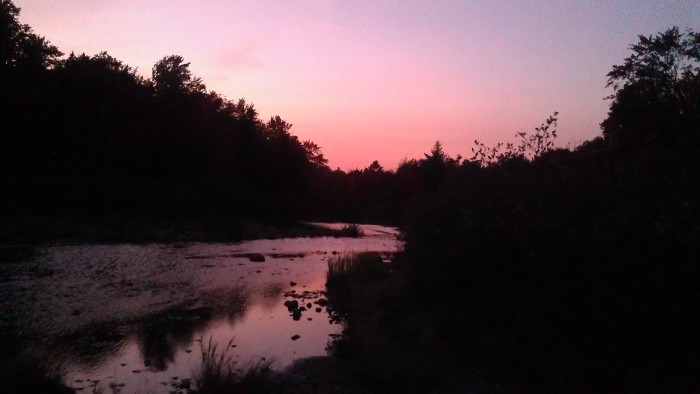 Our night walk in search of moose came up empty. But we did get these beautiful shots of the setting sun. 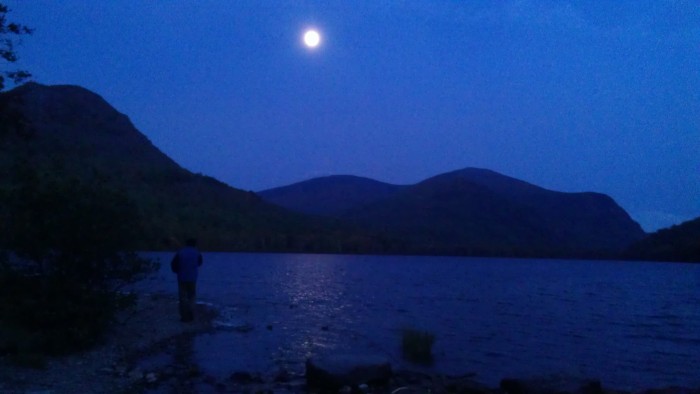 With a full (or nearly full) moon we walked the edge of South Branch Pond.

In the morning we headed out the Pogy Notch Trail to the Howe Brook Trail in search of pools and waterfalls.  Howe Brook flows into South Branch Pond, but when we first turned onto the trail that parallels the brook, we were shocked to find the brookbed an almost completely dry pile of stones. How could this be?  We continued walking upstream and the brook’s pools began to fill.  It turns out that the brook must flow partly under the deep gravel bed at it’s terminus, because as we continued up the pools and waterfalls became more and more impressive, filled with crystal clear cold water.

Andrew signs in at the register before heading out on the Pogy Notch Trail.

One of the many pools and waterfalls along Howe Brook.

The trail alongside the Brook was in desperate need of some trail work (as we were growing accustomed to with the trails we hiked in Baxter State Park).  In fact, at several places, the trail had caved into the brook.  The pools and waterfalls were rather neat and at one particularly deep pool Andrew spotted a muskrat!  It swam underwater, and with the water being so incredibly clear, we watched it swim upstream under an overhanging rock and out of sight.  We never would have guessed that a muskrat would hang out in this Brook, but with the pond just a mile downstream, I guess it as good as any place to find food. 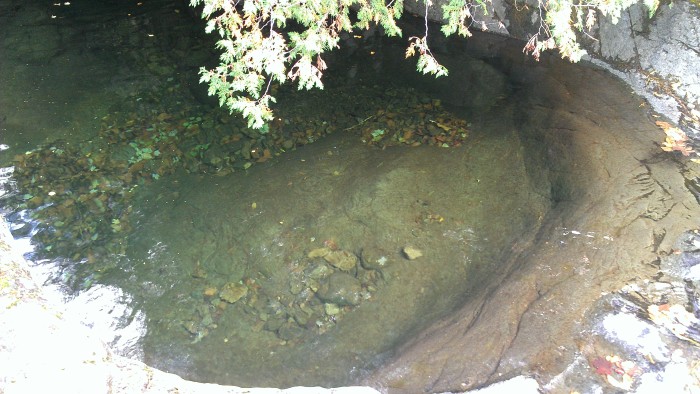 Looking down into the clear water of a pool on Howe Brook.

The trail skirts away from the Brook for a short while into the woods, up a small knoll, and finally back down alongside the Brook to the end of the trail and the largest of the waterfalls.  We scampered up to the top of the falls and ate our lunch, watching fallen leaves flow over the falls.

At the end of the trail we were rewarded with the largest waterfall of the hike.

On the way back down we turned south to see Upper South Branch Pond.  A small notch separates the two ponds. 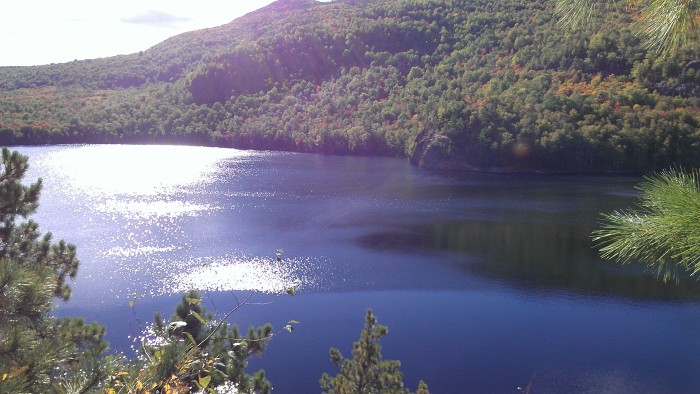 At this point, we departed for a few hours.  Andrew wanted to continue along the Upper South Branch Pond and try to head toward Pogy Notch, while Lindsay was content to just head back to the campsite and read her book.  So we said our goodbyes and ventured along alone.  As soon as they departed, Andrew’s hike became challenging as the trail crossed and descended a steep cliff face above the pond.  After descending back down to the pond, the trail returned to the valley floor toward Pogy Notch.  Andrew eventually found himself in some old forest and realized it was all familiar from an earlier journey.  Soon enough the massive hemlock he expected was quickly passed, but the light was fading and his GPS clock said that he would have to book-it to make it back to the campsite before dark.

Meanwhile, Lindsay made her way back to the campground to find new neighbors setting up tents and the rest of the campsites filling up for the Thursday night.  She read for a while, watched the loons swim by their private beach, and planned dinner as the sun set. 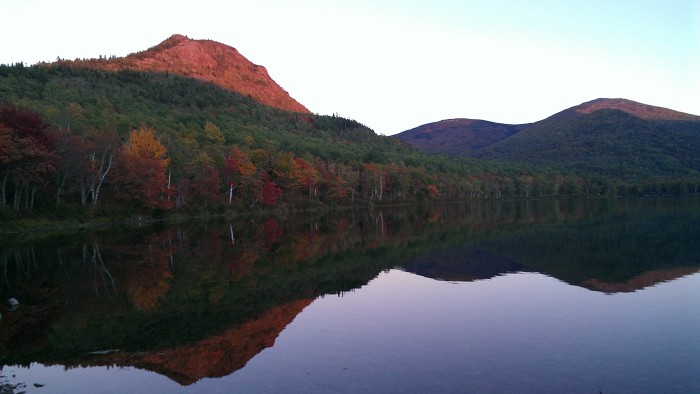 Picturesque views of South Branch Pond and the surrounding hills.

For the past couple of days we had been relying on Lindsay’s phone to tell us the time.  She had put it on “airplane mode” since there was no service but she uses it to take pictures.  But a couple of days ago, we started noticing that it didn’t match up to Andrew’s truck clock (but to be fair the truck clock was one hour off every 6 months since we didn’t know how to change the time).  When Andrew got back from his hike into Pogy Notch and we started to talk about how long he’d been gone and how fast he’d hiked back, we realized that the phone was off from the GPS time by 1.5 hours.  How did Lindsay’s phone slow down by 1.5 hours?  It all made sense though, since whenever we’d signed in at the registers our time never seemed to come out sequentially with the other entries.  And how some of the sign back-in times were hours after we were signing back-in.  Well, it didn’t really matter since we were on vacation.

Lindsay still bundled up in the chilly morning. Temperatures never were below freezing, but they must have been pretty close.

The next morning we packed up and headed back to New Hampshire.  It was a good vacation together and despite our complaints about the needed trail work, we know that we’ll be back to enjoy the scenery, the solitude, and the wonder of Baxter State Park.

7 thoughts on “South of the Pond”