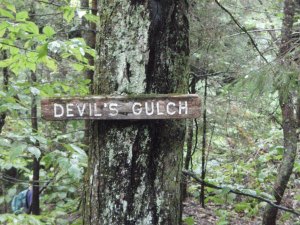 We headed over to Vermont the other week and had plans to do some backpacking, but the damage from Irene caused us to rethink going into the backcountry where we wouldn’t be certain that trails and bridges were still intact.  Instead we took a look at our maps and found the name: Devil’s Gulch.  Whatever that was, it was something to explore.  So, Andrew, Lindsay, and Amanda grabbed their daypacks and rain gear (and umbrellas) and headed to Rt 118 in Eden, VT to pick up the Long Trail.

The misty woods sets a spooky scene as we head toward Devil’s Gulch.

We parked in a lot with one other car, and headed up the wet trail.  It wasn’t raining when we started, but the world around us dripped from the overnight soaking and the mist held heavy in the air.   Soon we passed a hiking duo heading back down to their car who warned us of “the trees”.  They actually said “Watch out for the trees”.  We quizzically thanked them.  Were sugar maples going to come to life and beat us with wet branches?  We reached a 4 way junction and first headed east down to Ritterbush Pond.  The pond was smooth and quiet with two camps available for overnighters to sleep in.  They were locked up tight, but Amanda had flashbacks of a recent winter visit (she had come in from another trail).  After observing the difference between pale and spotted jewelweed we headed back up to the junction. 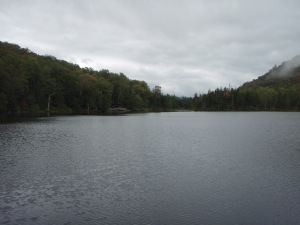 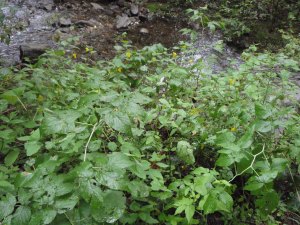 This time we took the south path toward Devil’s Gulch!  The anticipation was killing us, what was this gulch going to be like?  And soon we found out.  The start of Devil’s Gulch was a pass through cave that pops you out inside the rocky walled gulch.  With rock walls on either side, fern and moss covered boulders littered the trail.  Wow!  It was beautiful and slippery.  The rain seemed to brighten the greens, browns, and grays of the vegetation and rocks.  Not quite the dramatic scale of our local haunts of Ice Gulch and Mahoosuc Notch, similar but a little more user friendly. 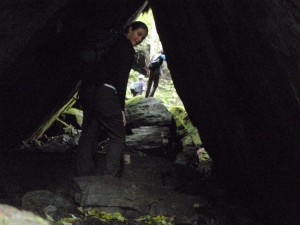 The entrance into Devil’s Gulch. 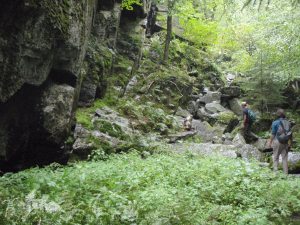 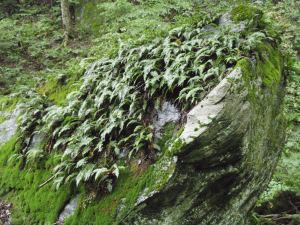 We continued out of the gulch toward the Spruce Ledge campsite which consisted of a shelter, picnic table, and overlook.  We ate our snacks and explored the area.  The overlook was appropriately named Devil’s Perch.  We gave the edge a wide berth when we felt hollowness beneath the soil.  Andrew scampered down to view underneath the Perch and confirmed the precarious overhang.

Lindsay and Andrew pose with the view. 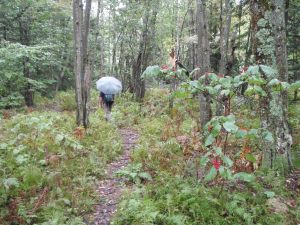 We headed back through Devil’s Gulch and took the west trail at the junction toward Big Muddy Pond, which was actually not very muddy.  A few trees were starting to turn red, Fall is just around the corner.  The Babcock trail looped us back to the parking lot.  We had made it without trees attacking us, although there were a few storm wind throws that we had to wiggle through with ease.    Devil’s Gulch is definitely a worthy exploration if you’re ever in the area.

Evidence that fall is on its way at Big Muddy Pond.

Amanda and Lindsay pose on the rock steps.