A week or so ago, Andrew and Lindsay were meeting a friend in Burlington for dinner so we found the closest State Park to camp at for the night: Underhill State Park.  Underhill is located on the west side of Mount Mansfield (the highest peak in VT).  So after a yummy dinner of crepes, good conversation with Jamie, and listening to the laid back sounds of one of the Wailing Jenny’s (never did catch her name), at The Skinny Pancake, we drove the 45 min. back to the park.  We thought we might as well hike up at least part way the next day or maybe to the top, our day was flexible.

The beauty of Mount Mansfield and the valley below.

The campground was quiet and we think we may have been the only campers that thursday evening.  There are shelters and tent platforms to choose from.  We stayed at the “Pine” shelter (3 sided) just above a brook.  In the morning we ran into an old Americorps friend just starting his last few weeks at Underhill State Park.  He had spent a summer at Monadnock State Park several years ago when Andrew was the head Park Ranger and Lindsay was filling in as needed (cause she had another job).  There were many cars in the lot in the morning even though we were the only campers because this was a popular hiking spot to head up Mount Mansfield.

A two-lined salamander found in a brook near Underhill State Park.

About mid-morning we packed up our camping gear and put it in the truck, then took our daypacks and headed up the trail.  The trail begins up an old CCC road.  The CCC (Civilian Conservation Corps) was a federal work program to help the US claw out of the depression in the 1930’s.  It hired men to build campgrounds and roads.  In this park, the CCC spent the majority of their time building the switchback road half way up the mountain, rather than building up the park facilities.  Many of the parks that Andrew manages now were built by the CCC and their hard work and ingenuity can be found in camp site layouts, pavilions, and trails.

A spring salamander, evidence that the water was clean and cool here.

Another trail, the Eagle Cutoff (our guess to be an Eagle Scout project), bisects the switchbacks of the road to the Sunset Ridge Trail, but on the way up we strolled along the CCC road, glad to stretch our legs.  We turned off the CCC road and headed up the Sunset Ridge Trail.  We crossed several brooks that were amazingly clear.  Lindsay questioned this and Andrew responded that it was because the soils were so sweet in Vermont.  Soils sweet?  Andrew explains: In our White Mountains typically the soils are more rocky and acidic as well as the vegetation types causing a heavy dose of tanins to wash down our NH streams.  In VT, the soils are more neutral with the stream water typically softer, as well as less softwood bogs leaching tanins. 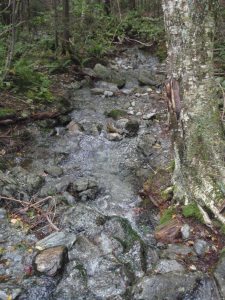 One of the many clear waterways on Mount Mansfield.

About 1/2 mile up the trail, we ran into a hiking duo staring off into the woods.  “There’s a moose in there,” one of them exclaimed.  And sure enough, about 100 yards in was a cow, just barely visible among the vegetation.  Lindsay tried to take a picture, but it just looks like a dark shadow in the woods.   We passed along the moose sighting information to the next hiking couple that came up behind us and continued up the trail.

Soon enough, we were above treeline.  The trail was marked heavily here and sometimes strings marked the edges of the path, evidence that too many people wander off trail.  The trees got shorter as we continued to climb the rock slabs up to the top.

Snack time! What a view!

At the Long Trail junction, Lindsay couldn’t wait any longer for a break for lunch, so we found a nice rock to sit upon and took a break.  Many people passed us heading up the last 1/4 mile to the summit.  A few backpackers, more day hikers, but mostly folks with inadequate gear to be hikers.  Lindsay asked “Is there a road up this mountain?”  To which Andrew replied, “Yea, you didn’t know that?”  “Nope,” Lindsay responded, “why are we hiking it then?” Just kidding, Lindsay thought, we definitely had the better experience.

Just below the summit of Mount Mansfield.

We summitted Mount Mansfield, The Chin, after our break and had wonderful views down into the Vermont valleys below.  What a feeling to be at the tip top of Vermont.  Then we walked back along the ceiling of Vermont, as the Long Trail wandered along the mostly open ridge often skirting cliffs with many side trails dipping precipitously past the last visible blaze.  At a ridgeline hut we asked the GMC Steward where we could pick up the Canyon Trail.  She enthusiastically gave us directions and said that it was worth it.  We didn’t have a trail description, just a map and wanted to explore some of the trails near the summit.  In the mid to late 1800’s there was a Hotel or Mountain House on the mountain, and we knew that trails around these old buildings usually brought guests to unique features or interesting view points.  Plus, with a name like Canyon Trail, we were sure to find something interesting.

Lindsay and Andrew pose on the summit of Mount Mansfield.

The Canyon Trail parallels the Long Trail to the west but it is another experience for sure!  The start of the trail is mossy and narrow, a sign that not many people go on this trail.  We quickly came to the canyon, where you drop down between two slabs of rock.  Both of us had to keep our composure and over come the feeling that the ridge above us was being held up by this rock we were walking underneath.  After that the trail squeezed you through a hole that forced us to take off our packs to get through.  At one point we had our choice to take the left bouldery trail or the right trail that was a straight shot between rock slabs.  We both took the right, but it was like a fairy tale scene where the closer you walk to the door, the larger you get and the smaller the door gets.  It was an optical illusion and we had to crawl and squeeze our way through!  But from afar it looked like no problem.  The trail continues on, squeezing through boulders, teetering above dark chasms, and finally pops out on soil again.  What a great trail!  Definitely a must if you ever hike up Mount Mansfield.

The mossy and less traveled start of Canyon Trail.

Andrew in the canyon.

Looking up from the Canyon Trail. The weight of the Mansfield ridge and the Long Trail is just overhead! 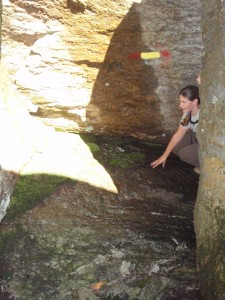 Lindsay squeezing her way out of a hole on the Canyon Trail.

The Canyon Trail passes through several caves and tunnels.

We took the Halfway House Trail back down to the CCC road and back down to our car.  What a great way to end our vacation in Vermont.

After Andrew complained about hiking behind Lindsay, who was taking her time and being careful, Andrew tripped on the smallest of rocks and fell! He was fine, but didn’t complain for the rest of the hike!