Last weekend the weather forecast said it was going to be hot.  So we decided to head somewhere that was cool.  We went crawling through caves at Lost River Gorge.  This tourist adventure park is in the White Mountains of New Hampshire and the property is owned by the Society for the Protection of NH Forests, but the tourist park is run by another outfitter.  It’s a little pricey, but it is a fun time.  We had been here once before almost one year ago when Alden was barely walking, but it started to thunderstorm while we were there and got chased out (note: they don’t give refunds or rain checks if this happens). 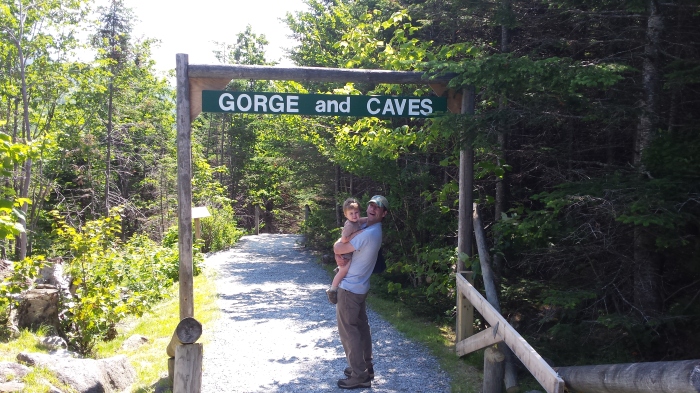 The entrance to the gorge and caves at Lost River Gorge.

The one mile trail is all boardwalk that starts off going down many stairs to the bottom of the gorge.  It was quite busy on this day with many large groups and other families crowding the boardwalks, but you can skirt around clusters and go back if one cave or feature is too crowded.  The caves are cool, dark, and easy to explore, although many require you to get down on hands and knees to squeeze through.  You can also by-pass them if you don’t want to go through any of the caves. 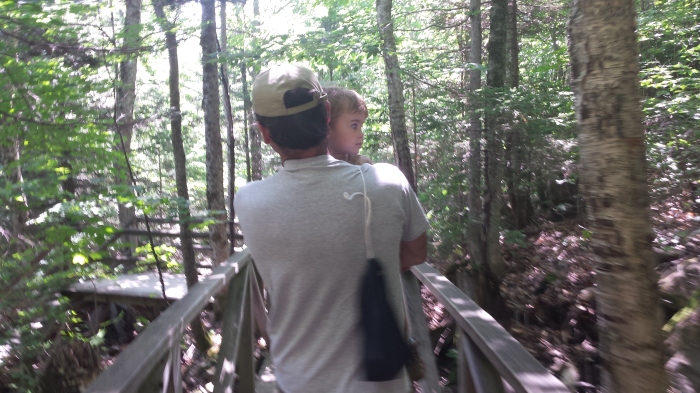 Walking on the boardwalk and looking at the scenery. 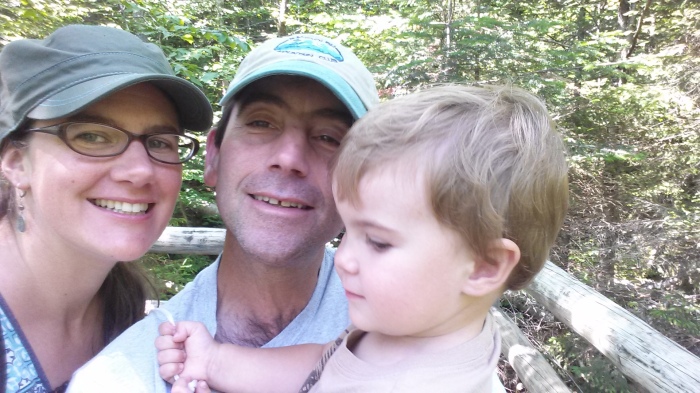 Group shot before we make take the final stairs into the gorge.

In the first caves Alden liked to crawl through and seemed to find them very interesting.  He also liked finding waterfalls and going over the bridges that connected the cave attractions. 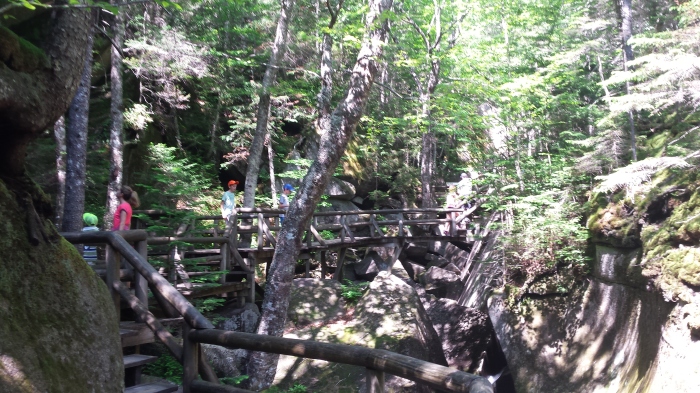 The boardwalk is expertly crafted through the gorge. 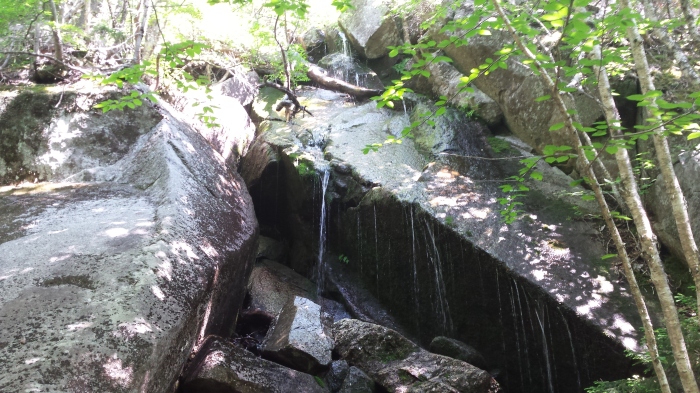 One of the many scenic waterfalls to enjoy along the trail.

We stopped at a well-placed bench to stop and eat a snack and watched a large group (several different families we think) pass by us.  Of course when we started on the boardwalk again, we quickly bumped into this large group at a part of the trail where several caves and loops intersect one another.  There was a short wait to go through the caves and unfortunately it felt like you couldn’t spend too much time in the caves because there was a line of people behind you. 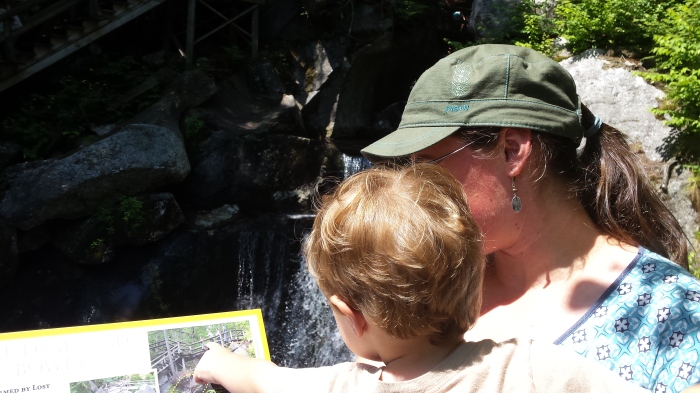 Alden pointing out the bridge in the picture.

Lindsay and Alden pose in front of a large waterfall.

About halfway through one of the caves, Alden turned to Lindsay and asked to be picked up and said “let’s go home.”  I guess he’d had enough, but he still had to crawl and squeeze out of the cave, which he did without much protest.  Even though Alden was done going in the caves, Andrew continued on to do a couple more while Lindsay and Alden did the by-passes. 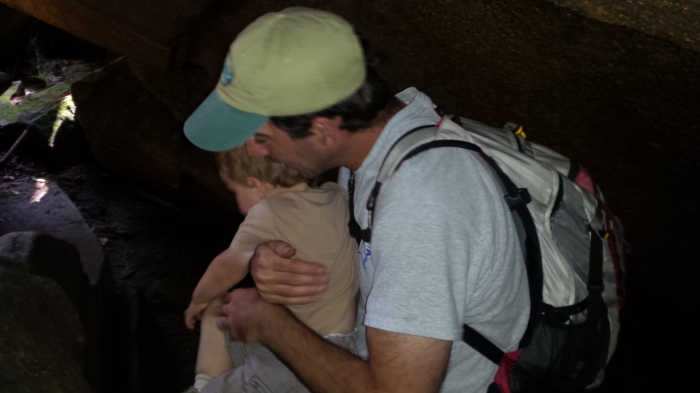 Andrew helps Alden through one of the caves. 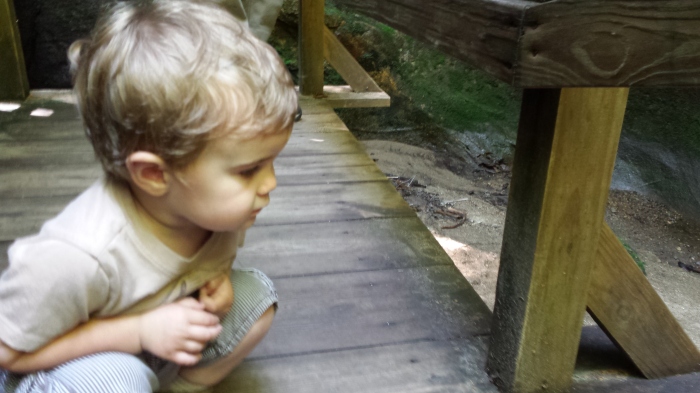 Alden stops to watch the water flow under some rocks. 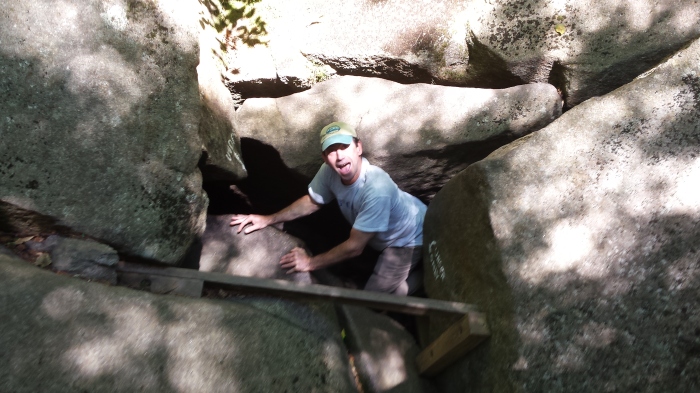 Andrew popping out of a crawl space and about to head into another cave.

We opted to do the boardwalk loop near the end which had some nice views through a pretty forest and got us away from the crowds.  We also checked out the new boardwalk and pavilion that had recently opened.  Afterwards Lindsay found out that just the day before Governor Maggie Hassan cut the ribbon for the grand opening. 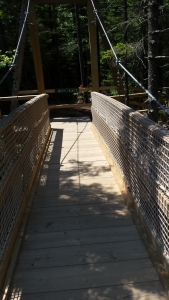 Back at the building, we checked out the rock sifting stations and played in the rushing water.  Even though we usually get outside in lesser traveled places, this was a great choice on such a hot day.  Any level of hiking/walking ability can do it and there are lots of benches to sit and rest, have a snack, and enjoy the view.  We saw the full range of ages too, from babies to grandparents, and everyone seemed to be having a good time.  We certainly had fun climbing through the caves and will come back again as Alden gets older in order to take advantage of the natural air conditioning. 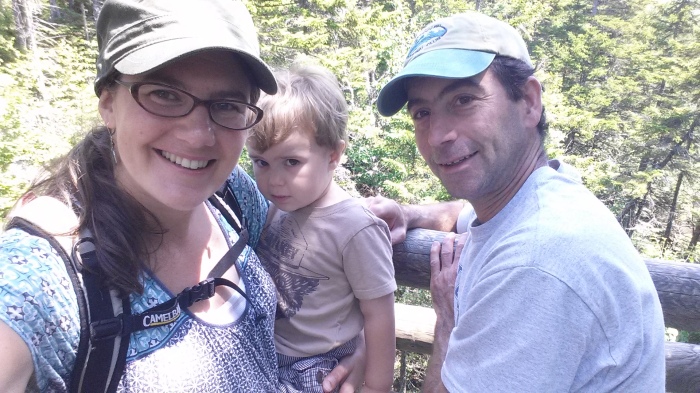 One more picture. Alden is ready to go home. 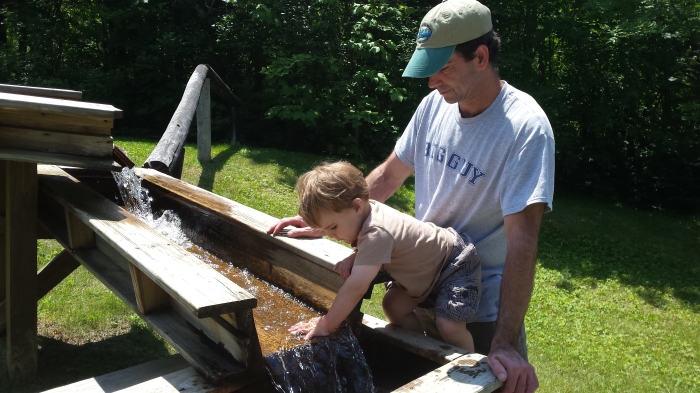 He was ready to go home, but then Alden found the water for the rock sifting activity (you can buy a bag of sand/rocks to sift).

3 thoughts on “Lost in the Caves”