After a Saturday filled with chores and lounging around at home, we were anxious to get outside (away from our yard that is), but the weather was threatening to thunderstorm so we nixed an exposed summit hike.  Recently a friend of ours had said that she enjoyed going to Gadwah Notch in Nash Stream State Forest and had described a fairy tale land where animals popped out from behind the trees along the way.  What?  This description certainly peeked our curiousity. 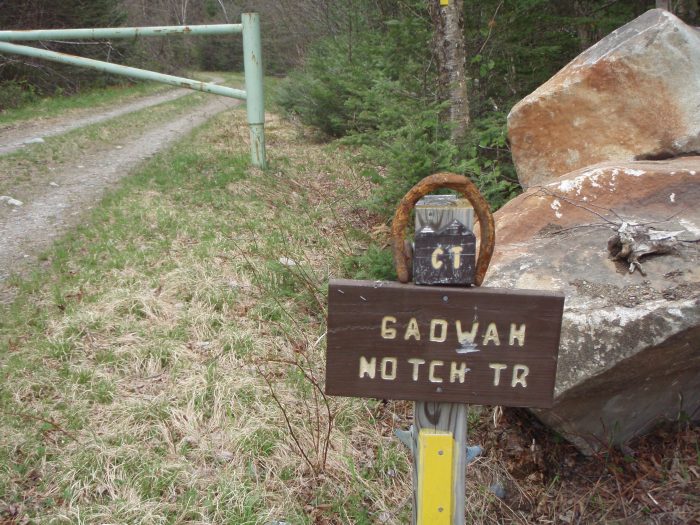 We drove to Nash Stream State Forest in Northern New Hampshire.  The lower gates were open and we drove past the camps that used to surround a pond.  The dam blew out in the 1970’s, but the camps surrounding the bog are still popular. We parked at a gate for the Gadwah Notch Trail, also part of the Cohos Trail. 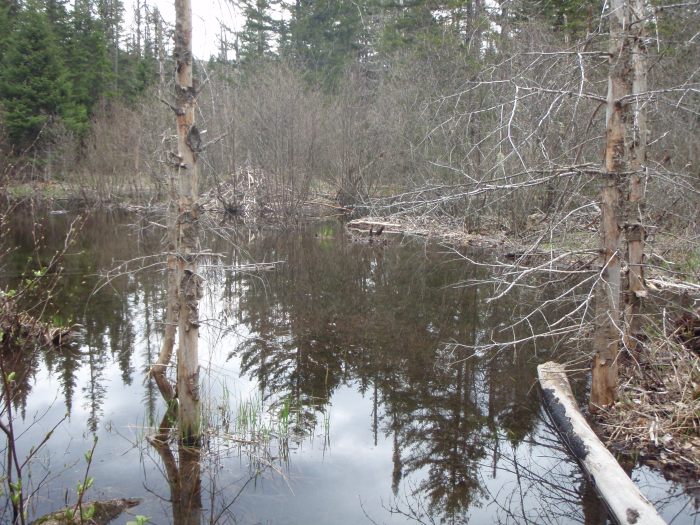 Just a few steps along the woods road we were greeted with an active beaver swamp and lots of birds singing and flitting about.  Lindsay pulled her binnoculars out and we tried to remember distinguishing marks on the brightly colored birds to look up in the bird book later (of course by the time we got home the conversation was: Did it have streaks on the chest and the sides or just the sides?  Do you remember an eye ring?  Obviously, we are still working on our birding skills!)  We continued up the road along a stream with marsh marigold blooming on the banks.  The forest around us was open hardwoods, still not completely leafed out, with purple trillium, spring beauty, trout lily, and dutchman’s breeches blooming in the understory.  We flushed two ruffed grouse, listened to hermit thrush calling (we know that one), and frogs called from a hidden pool.  It’s almost as if everything was singing “We are so happy you are hiking today!”  You know the scene in Roger Rabbit when the cartoon characters are all singing and dancing in their happy little world?  That’s what walking along this trail was starting to feel like.    “We are so happy you are hiking today!” 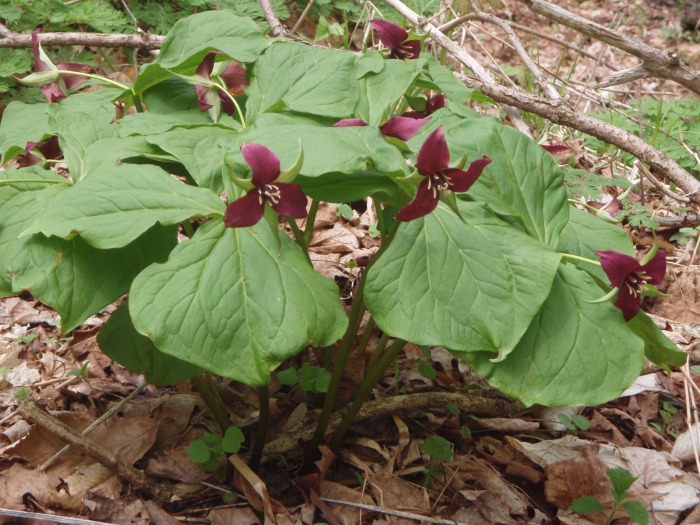 This clump of purple trillium formed a perfect bouquet. 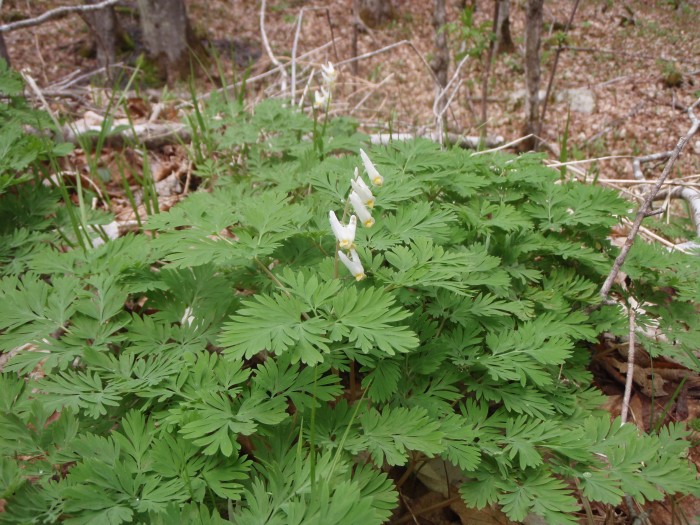 The road eventually popped out into a field with a beautiful view and tons of red admiral butterflies.  As Andrew walked ahead he flushed up a woodcock that twittered over Lindsay’s head.  Just as we started to think this place really was enchanted we watched a spruce grouse hop along a log and fly away.  We stepped over moose scat as we walked into another open area called “Muise Bowl” before the road ended (at 2 miles) and we continued on a trail to the “Bulldozer Flat” and crossed into a softwood forest.  We found a small patch of snow as we walked along some expertly placed log bridges. 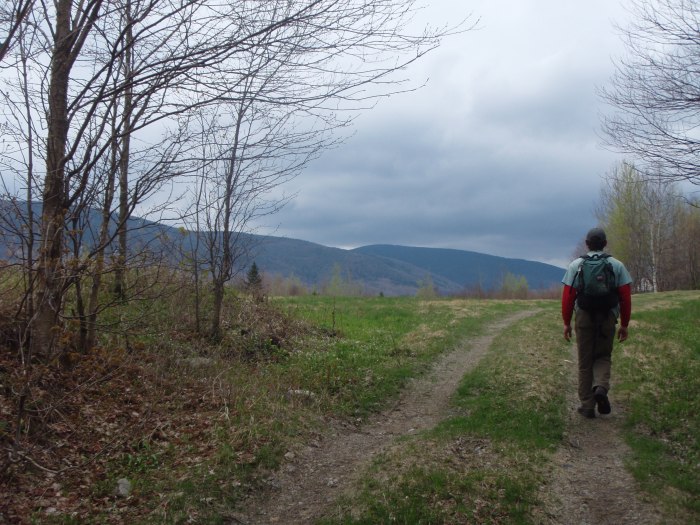 Andrew walking up into the first opening. 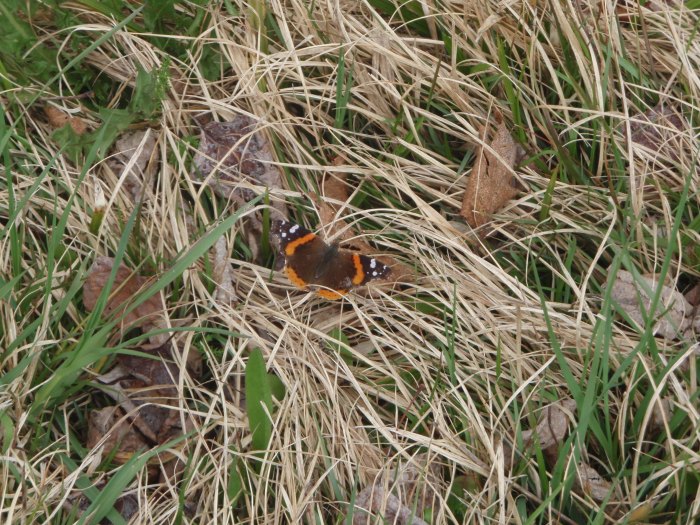 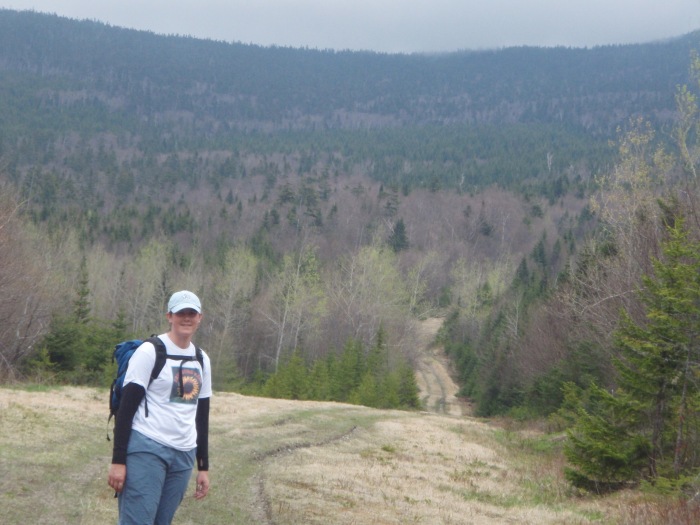 Lindsay on the Gadwah Notch Trail. 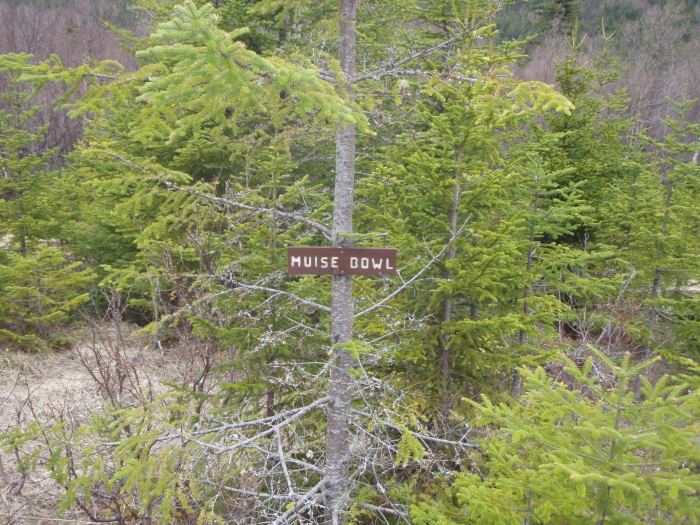 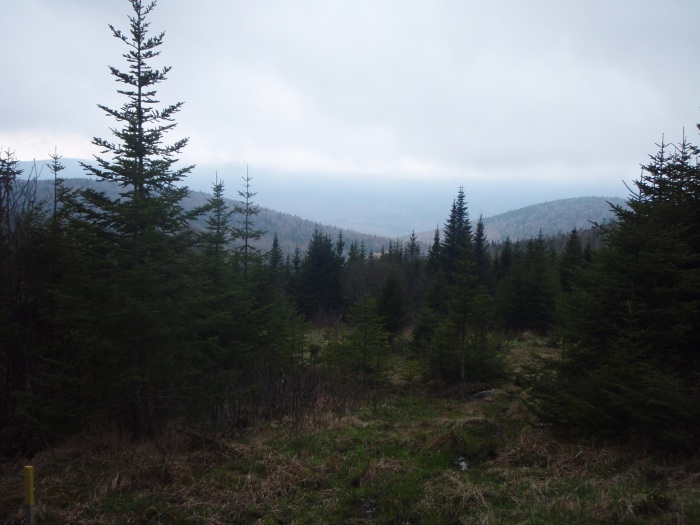 The view from Bulldozer Flat.

As we reached 2,500 feet in elevation Lindsay heard the nasal chickadee sound (another bird we know) – “boreal chickadee!”   Andrew was even lucky enough to view this brown capped little bird sitting on a tree branch next to the trail.  The trail skirts the actual notch of Gadwah and we were surprised to check the GPS to find that we had crossed over and were starting to head down the backside after just one mile since the road ended.  We took a break at some log bridges within the notch and listened to the quiet stillness of the world.  The only sound we heard was the beeps and clicks of a passing raven (sometimes they make the most interesting noises!). 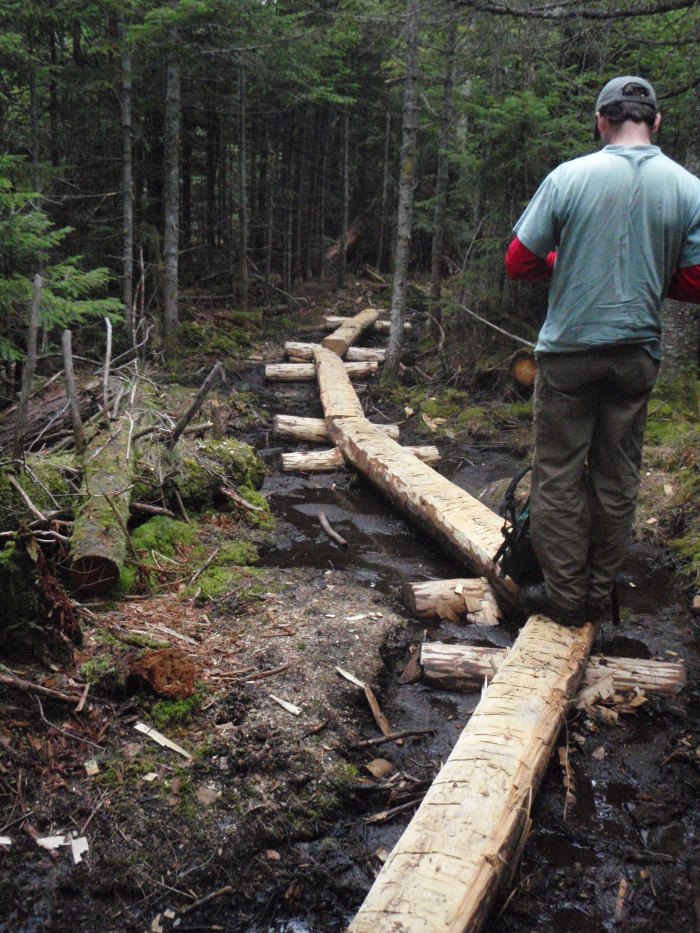 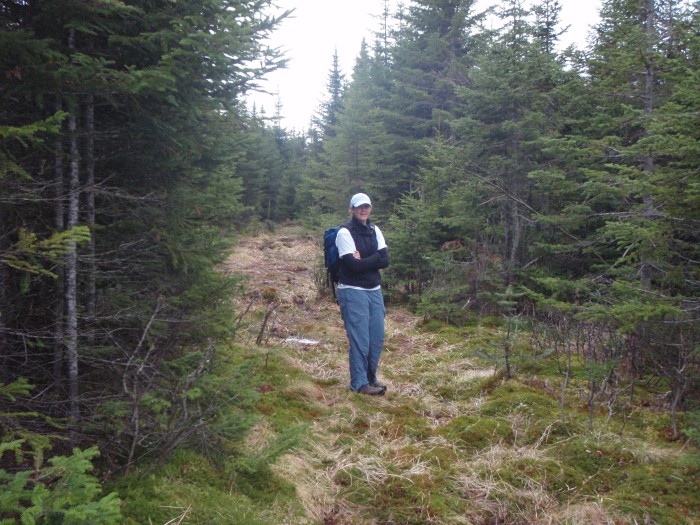 Lindsay on the Gadwah Notch Trail.

We turned around and headed back down the trail wondering where the rain was, since the sun had come out from behind the clouds.  What a beautiful and peaceful walk for a lazy Sunday afternoon.