We did our usual- slow to get going routine – the other morning, but finally picked out a quiet hike in Evans Notch, but we were quickly denied. The Evans Notch Road (Route 113) in Maine/New Hampshire is closed for the winter season. We pulled out our maps and found that there might be a way around to get into the Wilderness Area from the other side, so we drove around to find Flat Road in West Bethel Maine. We found our next turn onto a smaller road along Miles Brook and everything looked good for a mile of so, then the road turned to dirt, snow covered, with little evidence of use. But there was just an inch of snow and there were tire tracks so we carried on further to find seasonal camps. However, just when Lindsay’s GPS said we might be just about at the trailhead, the road curved sharply uphill and turned out of sight. We stopped at the bottom of the hill and surveyed our options. The road was down to one travel lane and at the point where we had stopped there was a place to turn around, but there was no guarantee of what lay ahead up the hill and around the corner. The temperature’s were supposed to rise that day, and we started to get worried about getting stuck in the snow and mud on the way out. Maybe we were being too cautious, but we thought we better turn around and save exploring the rest of this road on a summer day.

Back on Flat Road, we turned south and headed toward Crocker Pond. We found what looked like a promising and shortish hike into Albany Notch along the Albany Notch Trail. The gate into this section of the White Mountain National Forest was still open and we easily found the parking area. We jumped out, anxious to get outside after searching for a place to hike for the past couple of hours! We checked out the kiosk and read the notice about the potential beaver damage and headed up the trail. 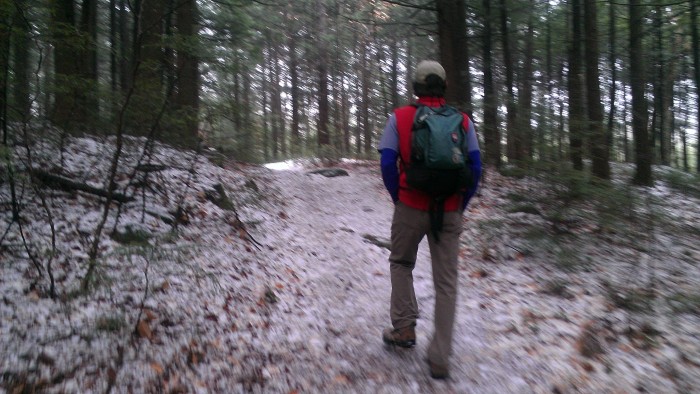 The trail is easy to follow and looks to be heavily used in the summer months. Flagging could be seen all over in the woods near the trail indicating that a forestry operation is in the works, but it looks like it will stay clear of the trail treadway. 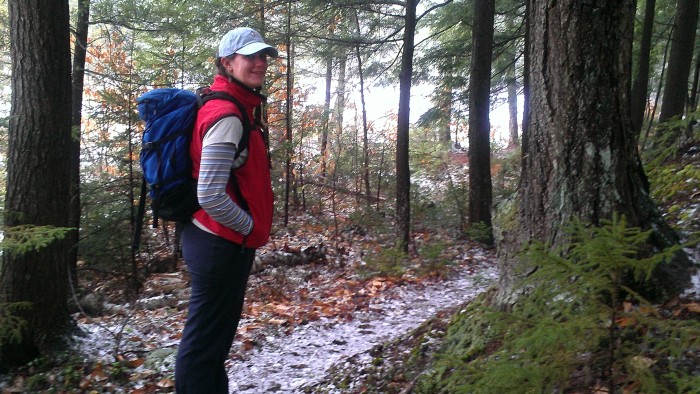 Lindsay on the Albany Notch Trail.

The trail traverses pretty hemlock woods, crosses a beaver dam (where the trail was rerouted recently), pops out into a hardwood forest, and then nestles back into a mixed forest. 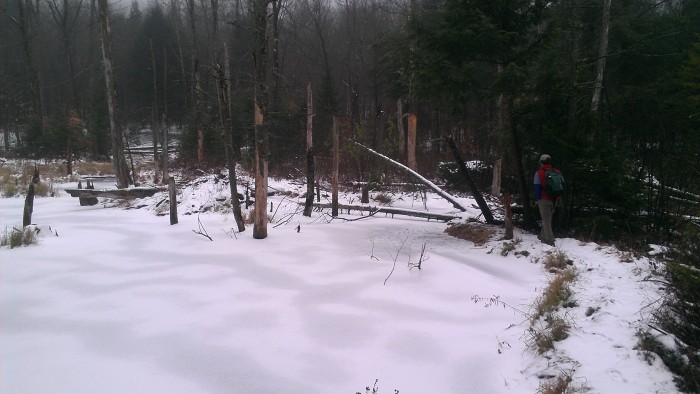 The trail crosses over the beaver dam.

As we hiked higher in elevation, Lindsay took out her GPS to see when the intersection with the Albany Mountain and Albany Notch Trail would occur. We passed the junction by a quarter mile or so and didn’t have any intention of going up the Mountain, so we stopped at a stream and had a snack and then headed back down to find the intersection. But where the junction looked to be on our maps and the GPS just didn’t seem to exist. We did find some old cairns on the opposite side of the trail where decades ago a trail must have gone, but we thought that this junction should be plainly obvious. We weren’t looking at old maps, it was the latest AMC Mountain Guide map. We walked back down to the beaver dam just in case the junction was rerouted from down there, but no luck. 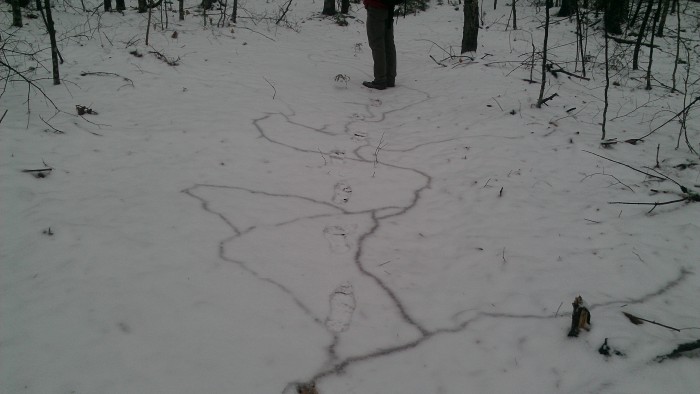 With only a couple inches of snow, we could see where little critters were busy tunneling under the snow.

We headed back up the trail to look again and decided to just veer off into the woods when the GPS told us to. And as soon as we jumped off trail we found old paint. Hmmm…we wondered why the trail was removed. The old Albany Notch trail was easy to follow, the treadway was mostly there and paint still could be seen on the trees. We found rock piles and parts of stone walls, evidence that someone settled in this very spot many years ago. They must have closed the trail because of the the beaver damage, but let’s keep going we thought. 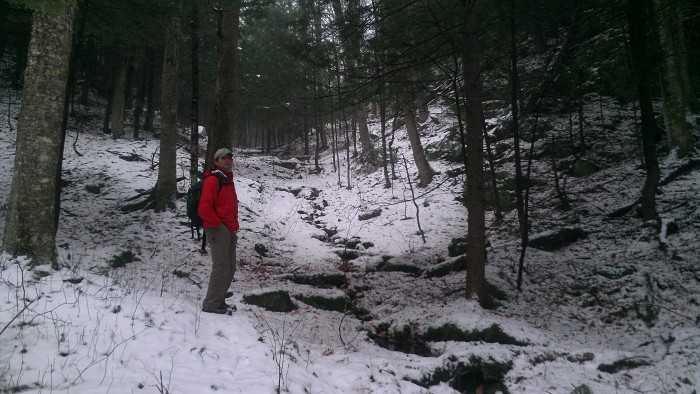 Andrew in the “lower” notch on the closed Albany Notch Trail.

We finally came to a beautiful and interesting notch, but not the marked Albany Notch. Large boulders on both sides of the hillside invited exploration. Beneath the inch of snow and moss, we saw bright white quartz rocks and guessed that someone long ago may have chiseled it out for trade. The trail ran right up the middle of the notch, next to a small stream with smaller rocks. Just a beautiful spot that seemed to be a natural route of travel. 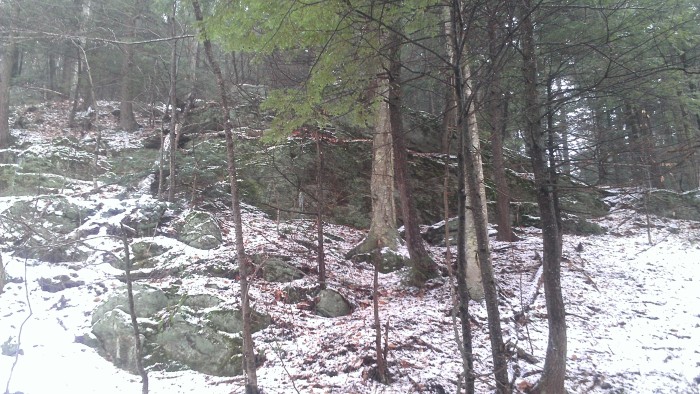 The ledges and boulders to the right of the notch. 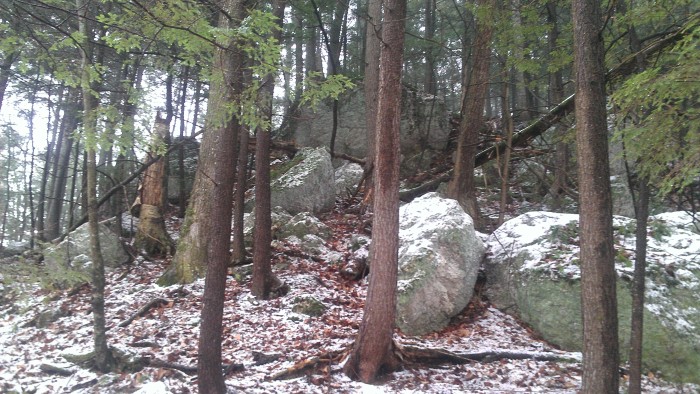 The ledges and boulders to the left of the notch.

We continued a little further along, but after checking our GPS and recognizing that the trail was getting wetter, we thought we had wasted enough time trying to find the trail, that we wouldn’t be able to make it all the way to the notch indicated on the map. The posted beaver damage must have been further along. We carefully made our way back through the little notch. Andrew went in front of Lindsay who was sliding down the snow and leaves. Of course only falling on her butt, the minute she said that she was fine and Andrew could go ahead.

At New England Brook, we explored the old logging road to see if it was clear for easy travel back to the road for a loop, but it would’ve been a little difficult since it had been several years since it was cut over and used. 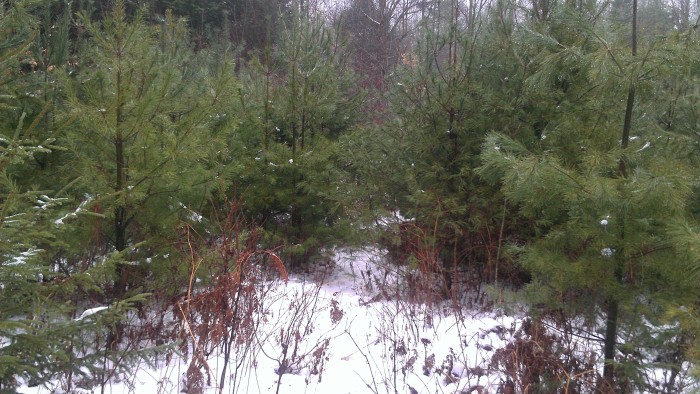 The overgrown logging road. Andrew is somewhere in those white pines.

Instead we headed back to the trail, following the old trail exactly to where the intersection would’ve been. The Rangers had brushed in the section of trail very well near the end, enough that we couldn’t tell, but interestingly it popped us out right across from that other old trail with cairns that had drew our attention earlier. Looks like the Albany Notch used to continue on! We’ll have to check some old maps to see if we were right. 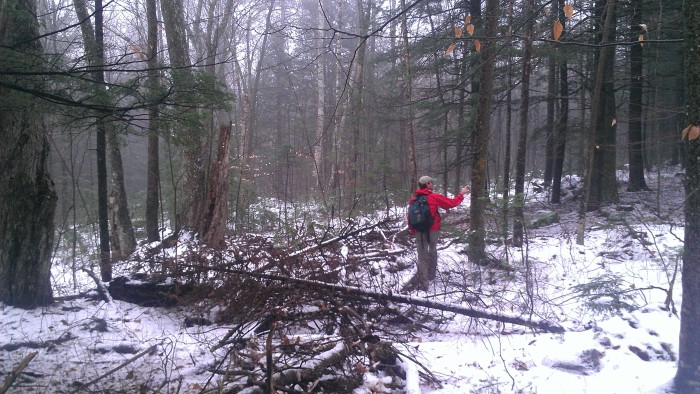 Andrew points out an old marker. Notice the brambly brush that was used to fill in the closed Albany Notch Trail.

As we made our way back down to the beaver dam, we realized that even though we had made several sets of tracks earlier looking for the Notch Trail, there seemed to be two other tracks. By the time we made it back to the car, we knew that two people had also come out for a short hike, but only looped around the beaver dam and back.

Back at the kiosk we researched a bit more. Did it say the Albany Notch Trail was closed? Well, sort of. That part of the trail wasn’t showing on their large map and the beaver warning did say that the trail was closed “between the spurs”. In our opinion, they probably should’ve just come right out and said “Albany Notch Trail Closed from here to Albany Mountain Spur Trail” or they should’ve shown the trail on their map and drew X’s showing that the first section was closed. Little did they know that we would find it anyway! 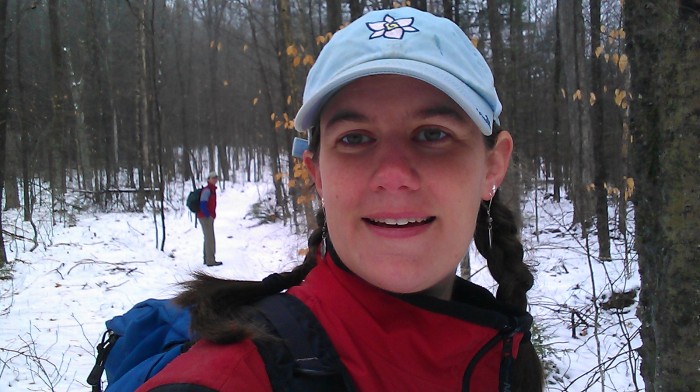 We hope you enjoyed our hike!

Well, with several false starts to the day, we did get outside for a adventurous hike! Maybe someone else would’ve just given up, but we stuck it out and had a fun day.

2 thoughts on “Albany “Not” Trail”

Leave a Reply to Bev aka Jackie O. Cancel reply